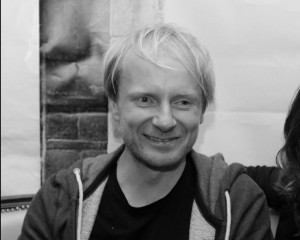 Jochen Schmidt was born in 1970 in East Berlin. He took part in several language holidays during his studies, worked at a university, and has translated numerous works into German, such as »Shenzhen« and »Pyongyang« by Franco-Canadian graphic novelist Guy Delisle. As the co-founder of the weekly stage readings »Chaussee der Enthusiasten« in Berlin, which ended in 2015, his repertoire ranges from short stories, newspaper columns and comic scripts to travel writing and absurd sketches and notes.

»Triumphgemüse« (2000, tr. Triumphant vegetables), Schmidt’s first debut, impresses with its endless series of bizarre characters, parading their brittle dignity. This hyper-realistic examination of numerous episodes from the era following the fall of the Berlin Wall, embedded in a mild melancholia, extracts a laconic power from its characters – as for example in »Harnusch mäht als wärs ein Tanz« (tr. Harnusch mows as if he’s dancing) – masterfully giving rhythm to every text. That this work is also an unscrupulous journey through literature, and an intimate account of appropriation can be seen for example in the narrator, Jürgen Reip, who off-handedly confesses: »Of course I still wasn’t Hemingway. And should I be wrong, then it would be pretty hard for outsiders to tell.« Schmidt’s passionate relationship with language expresses itself in his »apparently endless delight in telling stories« (»Frankfurter Allgemeine Zeitung«), which brought forth »Müller haut uns raus« (2002, tr. Müller kicks us out), a biographical coming-of-age novel, and, in 2004, »Gebrauchsanweisung für die Bretagne« (tr. Operating manual for Brittany). On the one hand, he has transformed travel writing into a strictly subjective literary form, in which the reader observes the author observing everything going on around him, and on the other hand he creates a stylized portrait of Brittany as a place characterized by bleak landscapes and wild coastal regions populated by bizarre outsiders in a sort of reverse colonization. »Operating manuals« for Romania (2013) and East Germany (2015) followed. In the novel »Schneckenmühle« (2013; tr. Snail mill), it isn’t only puberty that signals an irreversible change in 14-year-old Jens’ life; in fact, in the summer of 1989 the whole of the GDR was more than ready for a major change, which Schmidt describes with great affection and lashings of humor. Press reviews of »Der Wächter von Pankow« (2015; tr. The custodian of Pankow) compared him to Marcel Proust, whose seminal work »In Search of Lost Time« Schmidt studied in great depth, laying bare the many facets of his daily reading regime of Proust in »Schmidt liest Proust« (2008). His latest novel »Zuckersand« (2017; tr. Sugar sand) is a »book for fathers«, in which Schmidt observes his two-year-old son discover the world and is reminded of his own childhood in the process.

The author lives in Berlin.