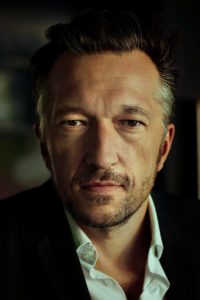 Lukas Bärfuss was born in Thun in the canton of Bern, Switzerland, in 1971. After finishing school, he was employed as a bookseller, among other jobs. Since 1991 he has worked as a freelance writer and dramatic adviser. In 1998, together with director Samuel Schwarz, he formed the artists’ group 400asa, which operates on the stage as well as in film and radio and is still active today. As part of that collective, he wrote multiple radio plays, including »Medeää« (2000), which won the ZKB Patronage Prize from the Zürcher Kantonalbank. He was also involved with other theaters as an author and wrote »Die Reise von Klaus und Edith durch den Schacht zum Mittelpunkt der Erde« (2001; tr: Klaus and Edith’s Journey through the Shaft to the Middle of the Earth) and »Vier Bilder der Liebe« (2002; tr: Four Pictures of Love), both of which were premiered in Bochum.

Bärfuss made his prose début with the novella »Die toten Männer« (2002; tr: The Dead Men), which describes a bookseller’s retreat from life, motivated by a desire for autonomy, ego-centrism, and over-stimulation. The play »Meienbergs Tod« (2001; tr: Meienberg’s Death) transforms itself through a variety of alienating devices to express the prickliness of the investigative journalist Meienberg, whose death lends the work its title, reflecting not only his life, work, and suicide, but also taking aim at the hypocrisies of the cultural milieu. After numerous international stagings, the widely translated work »Die sexuellen Neurosen unserer Eltern« (2003; Eng. »The Sexual Neuroses of Our Parents«, 2007) was made into a film by Stina Werenfels. In his celebrated novel »Hundert Tage« (2008; Eng. »One Hundred Days«, 2011), Bärfuss depicts how the naive optimism of a young development worker is shattered in the face of the barbarism of the Rwandan genocide. In »Öl« (2009; tr: Oil), which premiered with Nina Hoss in the lead at the Deutsches Theater in Berlin, characters running the gamut between greed and tedium meet in a nameless no-man’s land. Tracing the fine line between meaning and self-destruction, his novel »Koala« (2014) deals with his brother’s suicide and examines the milestones in the biography of the deceased. His novel »Hagard« (2017) follows a »wildling«, a mere real estate agent who suddenly becomes detached from all civilizing engagements and pursues a woman for a day and a half until this obsession finally ends with his death. Bärfuss also displayed his talent as an essayist with volumes such as »Stil und Moral« (2015; tr: Style and Morals) as well as  »Die Krone der Schöpfung« (2020; tr: The Crown of Creation). With »Contact« (2018), he published his first collection of English-language poems. In 2016, he translated Walter Benjamin’s literary letters into French together with Muriel Pic. He also translated Pic’s poetry collection »Élegies documentaires« into German in 2019.

Bärfuss has received numerous honors for his work, including the Dramatist of the Year at the Mülheim Theater Days (2005), the Anna Seghers Prize (2008), the Hans Fallada Prize (2010), the Berlin Literature Prize (2013), the Solothurn Literature Prize and the Swiss Book Prize (2014), and the Georg Büchner Prize (2019). Bärfuss lives in Zurich.