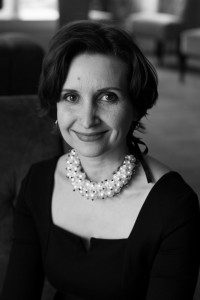 Marjana Savka was born in the western Ukrainian city of Kopychyntsi in 1973. Her father is the theatre director and civil rights campaigner Orest Savka. She already showed interest in theatre and music at a young age and later studied Ukrainian philology in Lviv. During her university studies, she was a member of the literary group MMJUNNA TUGA (Society of Lonely Graphomanics), whose name was created using the initial letters of the member’s first names. After continuing her studies at the Les Kurbas Theatre, she worked at the Stefanyk National Science Library in Lviv, where she was a young researcher in the periodicals department and in 2002 published her historical-bibliographical examination of the Ukrainian emigrant press in Czechoslovakia in the 1920s and 1930s. In the 1990s she was also an editor for the literature section of the »Postup« newspaper. Together with her husband Mykola Scheyko, in 2001 she founded the Widawnictwa Starogo Lewa publishing house in Lviv, which originally specialised in children’s and young adult literature, but now also publishes literature for adults.

In 1995, she debuted her first collection of poetry, »Oholeni rusla« (tr. Naked Riverbeds), followed by the collections »Maljunki na kameni« (1998, tr. Paintings on Stones), »Girka mandragora« (2002, tr. Bitter Mandrake), for which she was recognised at the IX. Publisher’s Forum in Lviv, »Kochannja i wijna« (2002, tr. Love and War), and »Boston-dshaz« (2008, tr. Boston Jazz), among others. She also wrote verse and stories for children. Her children’s book »Kazka pro Starogo Lewa« (2011, tr. The Tale of the Old Lion) was included in the international youth library »The White Raven«. For the anthology »Skype Mama« (2013), she wrote the chapter »With a Child’s Eyes«, in which she reveals the situation of the estimated five million, some of which illegal, Ukrainian migratory workers who only see their children via Skype. In 2016, she initiated the project »12 Unbelievable Women«, in which she interviews influential women in Ukraine, always at the same café in Lviv. Each of the interviews were dedicated to specific values such as equality, independence, tolerance, gratitude, empathy, or freedom. In 2017, she published a book about these interviews.

For her literary works, Savka won the first prize at the Fackel literature competition in 1998 and the International Wassyl Stus Prize in 2003. Her poems have been translated into English, Russian, Polish, Belarussian, Lithuanian, German, and Portuguese. Savka actively campaigns against changes to the use of language laws and the alienation between eastern and western Ukraine. In 2014, she supported the call for one day on which Russian is spoken in Lviv.