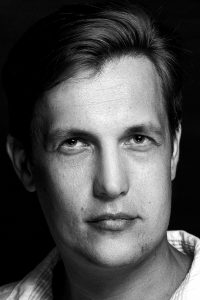 The Ukrainian writer and columnist Max Kidruk was born in 1984 in the village of Vladimirez in the Rivne region. After attending a school with a physical mathematics focus that also specialized in foreign languages, he enrolled at the Faculty of Mechanics and Energy Economics of the Technical University of Rivne in 2001. In his third year, he started working as a programmer. In 2005, he moved to Kyiv and completed his postgraduate studies at the Faculty of Thermal Power Engineering at the Kyiv Polytechnic Institute. In 2007, Maxim Kidruk received a scholarship to study abroad and went to Stockholm, where he attended the Graduate School of the Royal Institute of Technology. From then on, he traveled extensively throughout Europe, visiting Finland, Norway, Italy, France, and the Baltic states in 2007 and 2008.

After a long stay in Mexico in the summer of 2008, Kidruk published the novel »Meksikanski chroniki. Istorija odniei mrii« (2009; tr: Mexican Chronicles: The Story of a Dream), which won him second place in the »Koronazija slowa« competition in 2009. The following year, he made another major trip, this time to South America (Ecuador, Peru, Chile) and Easter Island, where Kidruk was registered as the first official Ukrainian visitor. His experiences flowed into the two-volume work »Podorosh an pup Semli« (2010; tr: Journey to the Navel of the World). Further long journeys followed, including to the Middle East, where Kidruk witnessed the Egyptian revolution. In April 2011, he visited New Zealand as part of the »To Zealand!« campaign organized with Sergey Pritula, and in 2014, his autobiographical book »Na Selandiju!« (tr: To New Zealand!) was published, in which Kidruk describes his impressions of traveling in the Sahara and of the Egyptian Revolution in Cairo. It also includes stories set in Damascus Airport, and his experiences of the campaign in New Zealand.

From 2012, Kidruk also published a series of techno thrillers with great success, including the apocalyptic novel »Shorstoke nebo« (2014; tr: Cruel Heaven). It tells the story of the crash of a Ukrainian plane in France and its subsequent investigation, and is based in part on real events.

In 2015, Kidruk’s journalistic book »Ja, Ukrainiec« (tr: I Am Ukrainian) was published after being commission by the Polish publisher Akurat. In it, he analyzes the relations between Ukraine and Russia during the liberation war led by Bogdan Khmelnitsky, during Euromaidan, and during the war in eastern Ukraine.

In 2016 and 2018, Kidruk’s novels “Zazyrny u moi sny” and “ Where There is no God” were shortlisted for the BBC’s Book of the Year award. His newest book is “ Until the Light Fades Away”.