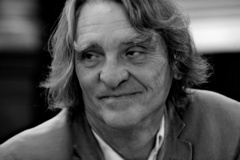 Melvin Burgess was born in London in 1954. He is one of the most pr olific and most widely discussed British authors of young people’s fiction. He grew up in Sussex and Surrey, moved to Bristol after he had finished school and later to London and spent fifteen years experimenting with writing. He completed a training course in journalism and had numerous casual jobs before publishing his first book for young adults »The Cry of the Wolf« (1990), which was immediately nominated for the Carnegie Medal (1991).

Melvin Burgess writes challenging novels for young people. Honestly, relentlessly and numerously he tackles sensitive topics. His literature offers no easy answers but leaves his readers agitated. His style remains close to the adolescents about whom and for whom he writes. His gripping and fast tales are both entertainment and a warning, for example his socio-realistic novel for young adults »Junk« (1996) with which Burgess became known as a Brit-Pop author in Germany in 1999. In 1997, the remarkable story about homeless, drug addicted youths in Bristol was awarded the Guardian Children’s Fiction Award and the Carnegie Medal. In an open yet sensitive way, Burgess captures the way of life of Gemma and Tar who run away from home, become junkies and nearly lose control of their lives. While his books have won numerous awards, and are read eagerly by youths, critics andadult readers do not infrequently react to his openness with skepticism. He himself points out that there is not enough literature for older youths which tackles their questions – questions they find important and exciting. In his novel for teenagers »Lady. My life as a Bitch«, published in 2001, he tells the story of the phantasmagoric dual identity of a seventeen year-old who is turned into a dog and starts to exploit her newly won freedom, while simultaneously reflecting self-critically on her pr evious life as a human. The offensive depiction of sexuality pr ovided much food for discussion. Burgess views the novel as »a comic allegory about sex and life – and all the important, darker issues that some people can’t handle teenagers reading about.« Burgess’ novel for young adults »Doing it« (2003) is a narrative following the quite unromantic phase of growing up of three teenage boys and their girlfriends. As far as Dino, Jonathan and Ben are concerned, sex is the only topic in their lives. Through their unsavoury discussions, which Burgess gives in their pr ovocative entirety, the reader is able to gain an intimate insight into the boys, who are plagued by fear and overwhelmed by their feelings, as they mature throughout the book. This »Burgess« also encourages us to reconsider the genre of »youth literature«. With »Bloodsong« (2005) he published the sequel to »Bloodtide« (1999). The first in the series portrays the bitter struggle of the enemy gangs, the Volons and the Conors, for superiority in a post-apocalyptic London. At the centre are Sigurd and Signy, who are tragically entwined in the rivalry. In order to bring back peace, Signy Volon is married to a Conor. As he annihillates her entire family, except for her brother Sigurd, who is able to survive in secret, Signy seeks revenge. In the second novel the reader learns of the fate of Sigurd. The setting of the book is a futuristic moon landscape. As Sigurd descends into the underworld following a grim fight with a dragon, he finds his love. Yet her rescue will bring heartache to all. In his most recent novel, »Sara’s Face« (2006) Burgess concerns himself with the controversial topic of cosmetic surgery. The seventeen year-old Sara wants nothing more than to be famous. As the unscrupulous popstar Jonathan Heat offers to pay for a face operation for his own self-serving reasons, she wants to take this apparent chance in spite of all her potential reservations.

With »The Ghost behind the Wall« (2001) and »Billy Elliot« (2000), Burgess offered books for younger readers that are just as warm-heartedly and vividly told as his novels for young adults. The author lives in Manchester.