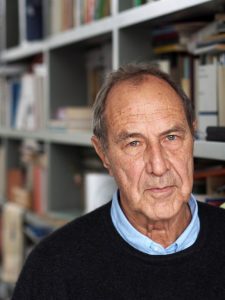 Michael Krüger was born in the Zeitz district of Wittgendorf in 1943 and grew up in Berlin. After completing his Abitur, he began an apprenticeship as a bookseller and registered as a guest student at the philosophy department of the Freie Universität Berlin. From 1962, he worked as a bookseller in London for three years. In 1968, he became an editor at the Carl Hanser Verlag, where he took on the position as literary director in 1986 and from 1995 to 2013 served as a managing director. Umberto Eco, Henning Mankell, Per Olof Enquist, and Orhan Pamuk are a few of the names he acquired for Hanser.

His own foray into writing began with poetry; his first poems were published in 1972, his first collection »Reginapoly« was published in 1976, and he received the Peter Huchel Prize for »Die Dronte« (1985, tr. The Dodo). His immediately recognisable lyricism is marked by a wealth of poetic images. A central theme of his poetic works are the simple things, explorations of nature, and circumstances of life that are plucked from concealment with a sharp eye and, in being regarded intently, are thus elevated. »It is a simple world that insists upon its unique features being seen, in consideration of and beyond the definitions that disguise them«, notes Suhrkamp Verlag. The dominating perspective of the flâneur is occasionally broken through reflections of his shadow or of an alter ego. In 1984, Krüger made his story debut with the volume »Was tun? Eine altmodische Geschichte« (tr. What Shall We Do? An Old-Fashioned Story). One year after the release of his novella »Das Ende des Romans« (1991, Eng. The End of the Novel, 1992) about a writer’s failure, in 1991 Krüger published his first novel »Der Mann im Turm« (Eng. The Man in the Tower, 1993). »Himmelfarb« (1993, Eng. edition 1994) received the Prix Medicis. His most recent novel »Das Irrenhaus« (2016, tr. The Asylum) is set in an apartment building and tells the story of a writer who creates a second life over which he gradually loses control. Krüger, whose books have been translated into 15 languages, has received numerous awards, including the Mörike Prize (2006), the Joseph Breitbach Prize (2010), the London Book Fair Lifetime Achievement Award (2013), and the Eichendorff-Literaturpreis (2017). He has also received honorary doctorates from the universities of Bielefeld and Tübingen, the »Ehrenbürgerrecht der Verlagsstadt München« (tr. honorary citizenship for his service to the publishing city of Munich), and the Federal Cross of Merit, First Class. Krüger, who has also translated numerous books including those of Peter Sis, was a co-founder of the first cooperatively organised author’s bookshop in 1973. Since 1981, he has edited the literary magazine »Akzente«, a forum for contemporary literature. In 2013, he was elected President of the Bayerische Akademie der Schönen Künste. In 2015, he curated the Poetica literature festival in Cologne. Michael Krüger lives in Munich.