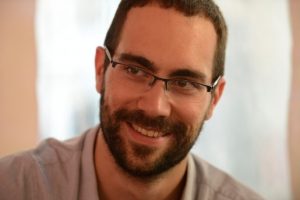 Mikael Ross was born in Munich. Even as a child he was an enthusiastic reader and drawer of comics. Nevertheless, he initially chose to train as a theater tailor at the Bayerische Staatsoper in Munich from 2004 to 2007. He consequently enrolled at the Kunsthochschule Berlin-Weißensee, completing his studies there in 2013. During that time he self-published his first comic book, »Herrengedeck« (2008, tr. Boilermaker), which was 35 pages long. While studying comic design at the,Atélier Bande Dessinée der École Supérieure des Arts Saint-Luc Bruxelles (ESA) during a year abroad, he met the Belgian comic author and artist Nicolas Wouters, who, like himself, was a punk and subculture aficionado. In 2013 they jointly drew and wrote the graphic novel »Les pieds dans le béton« (tr. Cement shoes), which was released by the Paris publisher Sarbacane. A German translation titled »Lauter Leben!« (Tr. Live louder) was published in 2014 by avant-Verlag. The book describes how childhood friends Thomas and Martin enter the squatter scene in Berlin and Brussels but ultimately drift apart. When they meet again many years later, Thomas is trying to escape the confines of his middle-class life, while Martin is still lurching aimlessly through Brussels’ nightlife and meanwhile homeless. The old contrasts between the characters – a restless life on the one hand and a longing for freedom on the other – resurface and confront the protagonists with existential questions of which life, which path, each one of them must follow. Mikael Ross presents a lively portray of the squatter milieu in his extremely dynamic watercolor drawings. He renders the nihilistic character of Martin as an aggressively male figure in excessively red tones. The second graphic novel »Totem« appeared in 2016, once again the product of a close collaboration with Nicolas Wouters. Their new book tells of a boy’s adventures at Boy Scout summer camp. Confronted with a harsh initiation rite, Louis must prove himself, as crossing the threshold to adulthood becomes a true test. In the process, the introverted boy is primarily confronted with his own self and his difficult family situation. Ross visualizes the story sensitively in his images; the deep, dark, damp forest breathes, and the central character in his red rain poncho seems to be an unwanted intruder there.

Mikael Ross’s comics have been displayed at various exhibitions and comic festivals in Germany and Switzerland. He currently lives and works in Berlin.