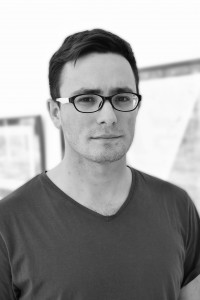 Myroslav Laiuk was born in 1990 in Smodna in the Ivano-Frankivsk region of western Ukraine. He studied literary theory and history as well as comparative literature at the Kyiv-Mohyla Academy and now studies at the PhD school there.

His first book of poetry »Samomu staty svitom« (tr: Becoming the world) appeared in 2008. »Osote!« (tr: Thistle!) followed in 2013, and is a collection of thoughts condensed into poetic texts, into a continuous dialog between a philosophizing lyrical first-person narrator and the thistle – that ubiquitous plant that is so hard to eradicate. This unusual exchange provides incomplete answers to all imaginable questions. The reader is introduced to the inner world of a man on a journey through the Carpathians, through its forests and steppe, encountering birds and other animals – less frequently people – of a man searching for a purpose in life. »There is a world war in my head«, he explains laconically. Laiuk confronts the question of the possibilities of poetic language, entirely in the sense of Fedor Tyutchev: »The thought – expressed – is a lie.« He illuminates various concepts ranging from Buddhist philosophy to Ludwig Wittgenstein’s theories. This volume’s poems, in which Laiuk has made masterful use of blank verse, thus mainly revolve around the art of creativity, and the process and doubts of an artist. Laiuk’s third collection of poetry »Metrofobija« (tr: Metrophobia) appeared in 2015, and his prose debut »Babornja« in 2016. At of the center of this grotesque satirical novel stands the aged biology teacher Marija Semenko, as she looks back on her life. »A careful and vivid analysis of a decaying and sadistic generation, who educated the current generation and lovingly handed down their putrification and hideousness«, wrote the well-known author Taras Prokhasko.

Laiuk’s poetry has been translated into English, German, Russian, Czech, Polish, Spanish, Armenian, Azerbaijan, Lithuanian, and Belorussian. He has received a number of literary awards, including the Smoloskyp Prize for poetry in 2012, The LitAkcent Prize for the best poetry book of the year in 2013 and 2015, Kovalevyh Foundation Prize in 2015, short list of BBC Ukrainian Book of the Year in 2016 and others. The author lives in Kyiv.