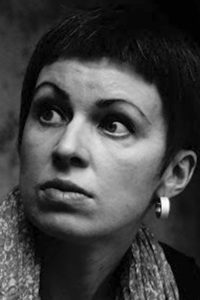 Natalka Sniadanko was born in 1973 in Lviv, Ukraine. She studied Ukrainian language and literature at the University of Lviv and then moved to Freiburg im Breisgau, where she studied Slavic and Romance languages and literature. After her return, she worked as an editor for the Lviv daily newspaper »Postup« and became a journalist for »Lvivska Gazeta« in 2002. Two years later, her first novel »Kolekcija pristrastej« (2004; tr: Collection of Passions) was published. It was received with enthusiasm, especially by the younger generation, and is now also available in German, Polish, Russian, Czech, and Hungarian.

The autobiographically inspired story tells of the young Ukrainian Olessja’s heartfelt emotions with a fresh and satirical style. Curious and stubborn, the adolescent explores the possibilities that gradually open up in her life. Against the advice of her parents, she studies philology and eventually arrives in Germany as an au pair. Against the background of her first unhappy love and the accumulating experiences from relationships with a Ukrainian, a (half-)Russian, an Italian, and a German, affectionate portraits of Eastern European middle-class life in post-Soviet times and of various national eccentricities unfold. Clichés about men and women, as well as about the East and the West, are affirmed, eroded and exaggerated with relish, played out against each other with irony and self mockery. »No woman can bear it«, Oljessa learns from the ex-wife of her Italian landlord. »He should have married an Italian. German women simply can’t cope with this patriarchal world. Maybe you can find a common language. In the Ukraine, the men must hit their wives too, and you suffer in silence, right?«

In her report »Deutschlandreise« (tr: Journey through Germany), Sniadanko sets off on a search for regional peculiarities, similarities, and differences in rural Germany and repeatedly draws attention to a European context that extends beyond the eastern borders of the EU. The author has also published articles in the »Süddeutsche Zeitung« and the »Gazeta Wyborcza«. She has translated Zbigniew Herbert, Czesław Miłosz, Jaroslaw Iwaszkiewicz, Janusz Wiszniewski, Olga Tokarczuk, Franz Kafka, Max Goldt, Friedrich Dürrenmatt, Monika Maron, Günter Grass, Stefan Zweig, and Feridun Zaimoglu into Ukrainian. After several short stories, her novel »Syndrom sterylnosti« (tr: Sterility Syndrome) was published in 2006. Her novel »Frau Mjuller ne nalaštovana platyty bilʹše« (tr: Frau Müller Has No Intention of Paying More), which has also been translated into German, was published in 2013.  Her most recent novel, »Der seidene Schlafrock von Erzherzog Wilhelm« (tr: The Silk Sleeping Robe of Archduke Wilhelm) is a reconstruction of the life of the Austro-Ukrainian politician. As is often the case in Sniadanko’s texts, the story is told from a female perspective; three generations of women describe their experiences, which are closely linked to the multinational and multilingual microcosm of Galicia. The novel will be published in German translation in 2020.

In 2007, Sniadanko received several prizes and awards, including the Joseph Konrad Prize from the Polish Institute in Kyiv. She received a scholarship from the Akademie der Künste in Berlin, the Paul Celan Fellowship for Translators from the Institute for Human Sciences in Vienna, the Schritte grant from the S.Fischer Foundation of the LCB Berlin, a scholarship from the Polish Ministry of Culture’s “Gaude Polonia” Programme in Warsaw and Krakow, and more.

She is a member of the Ukrainian PEN Club. She lives in Lviv.