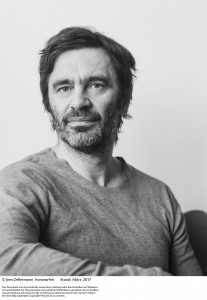 Nicol Ljubić was born in 1971 in Zagreb, and grew up in Greece, Sweden and Russia. He studied political science and attended the Henri Nannen School of Journalism in Hamburg. Already in 1999, he distinguished himself with the reportage »Menschliche Überreste, 110 Kilogramm« (tr, Human remains, 110 kg), which won the Hansel Mieth Prize for committed journalism. Apart from writing for different newspapers and radio networks, Ljubić joined the German Social Democratic Party in 2003; a self-experiment on which he based »Genosse Nachwuchs« (2004, tr. Comrade next generation), a documentary book about political groundwork and the desire to make a difference in society.

The issue of personal identity and the impact it can have took Ljubić in a totally different direction in »Mathildas Himmel« (2002; tr. Mathilda’s skies). This haunting tale of a young girl’s transition to adulthood is notable for its precise syntax and outstanding sensibility for moods and nuances. That Ljubić takes an interest in all facets of his characters’ stories is masterfully apparent in his biographical »Heimatroman oder Wie mein Vater Deutscher wurde« (2006, tr. Regional novel, or how my father became German), which describes Drago Ljubić ‘s journey from being a car mechanic in Zagreb via France to working as an aircraft mechanic for Lufthansa in Germany. His return to places from his past is told in loving detail. The complex portrait of his father as he goes through the processes of migration and integration also provides a blueprint for the son’s story as a child of immigrants in the 1950s. »Meeresstille« (2010, tr. The stillness of the sea) addresses the massacres of the Bosnian War, issues of personal guilt, and biographical analysis by later generations. In his calm, thoughtful and, again, documentary-inspired style, Ljubić succeeds in presenting a fascinating portrait of a conflict that doesn’t end in the Balkans, but that continues traumatically in the hearts of children.

»Meeresstille« won the Ver.di-Literaturpreis Berlin-Brandenburg and Adelbert von Chamisso Promotional Prize. In 2012 he published »Schluss mit der Deutschenfeindlichkeit« (tr. No more anti-German sentiments), an anthology with works by 17 »German authors with immigrant backgrounds«, in order to weigh in on the debate about origin, identity and belonging. That same year he also published the novel »Als wäre es Liebe« (tr. As if it were love) about a femicidal murderer living in German post-war society, based on the story of German serial killer Heinrich Pommerenke. »Ein Mensch brennt« (2017; tr. A man on fire) is also based on a real person, Hartmut Gründler, a teacher from Tübingen who set himself on fire out of protest against the federal government’s nuclear policy in 1977. It focuses on how this uncompromising idealist’s actions affected his landlord’s family.