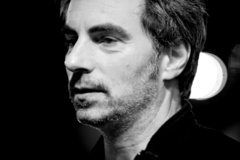 Nils Mohl was born in Hamburg in 1971. He studied Literature in Kiel, Thübingen and Berlin and Cultural Management in Weimar, and worked in construction, retail and logistics. He currently works as a copywriter for an ad agency, teaches creative writing at the University of Hamburg and is a freelance writer.

Mohl started writing in his late 20s, winning prizes for his short stories, such as the MDR Literature Prize and a literary grant from the City of Hamburg. Inspired by his own experience of working in a department store, »Kasse 53« (2008; tr. Checkout 53) describes six days in the life of a nameless character working in a department store somewhere in Hamburg in the summer of 1999. It is the sobering panorama of a life in which day after day, an endless stream of customers waits to be served. His subsequent collection of 12 stories »Ich wäre tendenziell für ein Happy End« (2009; tr. I tend to prefer a happy end), is yet again remarkable for the precise description of each character, all of whom are obsessed with success in various ways, driven by internal and external forces. All of them are much lonelier than they are willing to admit. »Es war einmal Indianerland« (2011; tr. Once upon a time in Indian Land), which was adapted for the theatre and performed at the Deutsches Theater Berlin in 2013, in equal measure a coming of age novel and a love story, is about a nameless 17-year old living on the outskirts of a big city, who is struggling with the pitfalls of adulthood during the last couple of vacation weeks. »Es war einmal indianerland« is not just for young adults, but definitely a book young people should read. The intensity with which Nils Mohl describes what it’s like to be 17 and to have »the right to be misunderstood by the world« (as one character in the novel states) is very close to young people’s experiences and bristles with authenticity. Carefully constructed and brimming with linguistic innovation, this novel challenges accepted modes of delivery and is deeply fascinating. His most recent novel »Zeit für Astronauten« (2016; tr. Time for Astronauts)« is also about growing up: Körts and Domino end up on the outskirts of a tourist resort in southern Europe, where they encounter Bozorg, erasing all three characters’ future development. After examining Cowboy and Western myths and the legend of King Arthur in »Stadtrandritter« (2013; tr. Suburban Knights), here Mohl plays with pirate assocations, once again asking the fundamental question: What are the feelings, desires and convictions of young adults between the ages of 17 and 20?