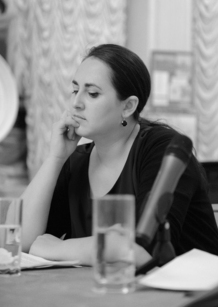 Nino Haratischwili was born in 1983 in Tiblisi, Georgia. After receiving a degree in film directing at the Theater and Film University in Tiblisi, she trained from 2003 to 2007 as a theater director at the Hamburg University of Music and Theater. As a youth Haratischwili founded a German-Georgian theater troupe called Fliedertheater (tr: Lilac Theater), becoming the group’s director from 1998 to 2003 while regularly writing and staging its plays. She would later direct numerous world premieres, including those of plays she wrote, such as »Z« at Hamburg’s Thalia Theater in 2006 and »Das Leben der Fische« (tr: The Life of Fish) at the Deutsches Theater in Göttingen. More recently, her text »Land der ersten Dinge / Bludičky« (tr: Country of First Things), part of the »The Art of Ageing« project developed by the European Theatre Convention, was coproduced by the Deutsches Theater in Berlin and the Slovakian National Theater in Bratislava, and celebrated its world premiere with direction by Brit Bartkowiak. Her dramatic works have received multiple honors, including first prize at Heidelberg’s Stückemarkt in 2008 and the Adelbert von Chamisso Prize in 2010.

In addition to plays such as »Georgia / Liv Stein« (2009) and »Zorn« (2011; tr: Anger), Haratischwili has published three novels since first publishing a short story titled »Der Cousin und Bekina« (2001; tr: The Cousin and Bekina). Her debut novel »Juja« (2010) explores how a book by a suicide victim in France in the 1970s compelled a series of young women to kill themselves, while also addressing questions concerning authorship and the authenticity of literature. A critic from the »Frankfurter Rundschau« highlighted the authors’s strong affinity to language, which is hardly surprising given her origins in the theater, and described the novel as an »intense mixture of criminological, autobiographical and mythological elements«. The same year »Juja« won the Debut Prize 2011 awarded by Buddenbrookhaus in Lübeck, Haratischwili’s second novel, »Mein sanfter Zwilling« (2011; tr: My Gentle Twin), received the Hotlist Prize, an award for books issued by independent publishers. For her latest novel, »Das achte Leben (Für Brilka)« (2014; tr: The Eighth Life (For Brilka)), the author received a cross-border grant from the Robert Bosch Foundation to conduct research in Russia and Georgia. The latter country is the setting for the beginning of an epic family saga, which opens with the birth of Stasia, the daughter of a factory owner, and spans six generations and over 1300 pages, showing how the turmoil of history shapes human lives. The story’s tension is driven by its highly effective characterization, masterful dramatic composition and dark humor.

Haratischwili, who in 2015 was honored with the Literaturpreis des Kulturkreises der deutschen Wirtschaft (tr: Literature Prize of the Cultural Committee of German Business), lives in Hamburg where she works a freelance author and director.