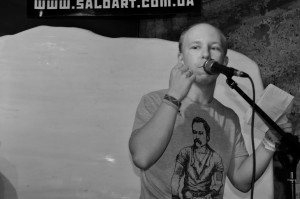 The writer, poet and children’s book author Oleksiy Chupa was born in 1986 in Makiivka, the third largest city in the Donetsk Basin industrial region of eastern Ukraine. He studied philology at the University of Donetsk and chemical technology in Makiivka, after which he worked as a machinist at a metallurgical company.

Chupa is the founder of the Donetsk Slam. Since winning the Noosfera competition in 2010, he has been considered one of the most important representatives of modern poety in Donetsk. His poetic texts are tender, sometimes openly erotic and sometimes political. In 2014 he moved to Lviv because of the war in Donbas, and subsequently published several prose works. The novel »Bomshy Donbasu« (2014; tr. The homeless of Donbas) tells of four homeless people in Makiivka who are constantly on the lookout for food and a warm place, and their struggle to survive. »Nobody’s interested in us, except maybe the police, and only if we don’t stay out of their way«, says one of them. Then a thick manuscript by an unknown author telling the true story of Ukraine falls into their hands. Once present-day Makiivka belonged to a powerful state. This »genuine« Ukraine was destroyed by troops from Lviv and Moscow. However, one of the homeless men burns the book to keep warm, thus symbolically destroying the old history of Ukraine, because he doesn’t recognize its true value. Thus, the knowledge about the real Ukraine is preserved only in the heads of the homeless. »Kazki mogo bomboshowishsha« (2014; tr. Fairy tales from my bunker) appeared the same year. It tells of people living in a four story Stalinesque building in Makiivka. Beginning on the ground floor, the narrator climbs the stairs, dedicating a story to each apartment along the way. Aptly and with precision, Chupa reveals the social structures and family relationships. His fantasy novel »Akwarium« (2015; tr. Aquarium) tells of a group of scientists who inadvertently create a vaccine that destroys humankind, and of the man who accidentally discovers the taped confession of one of the scientists. The novel is told in two storylines – the scientist and his audience – gradually turning into three, as the reader is drawn increasingly into the scientists’ cold-blooded and brutal game. The story’s unexpected denouement leaves a powerful impression and asks readers to reflect on life and the question of human culpability.

Chupa’s books »Bomshy Donbasu« and »10 sliw pro Wytciznu« made it onto the longlist of the BBC’s Ukrainian Book of the Year in 2014. In 2015 he was a scholarship holder of the »Gaude Polonia« program in Poland and a finalist of the Joseph Conrad Prize. The author lives in Lviv.