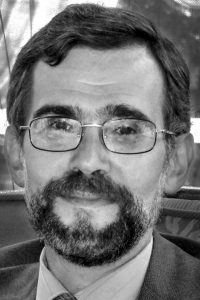 Oleksiy Nademlinsky was born in Odesa in 1961. He didn’t attend kindergarten and grew up under the care of his grandmother, who he pestered in a communal kitchen with countless questions. Many years later, the answers found their way into his children’s book »W debrjach odesskoj kuchni« (2008; tr: In the Wild Kitchen of Odesa).

During his secondary school years, Nademlinsky developed an interest in literature and writing his own texts, winning several regional writing competitions. After finishing school, he studied at the Odesa Technological Institute of Cooling Engineering and graduated in 1983. He then worked as an engineer for »Kisenmash«, »Medlabortekhnika«, and other companies in Odesa.

In 2007, Nademlinsky published his first children’s books with the Kyiv publishing house Grani-T. According to the author, he wanted to write the books he would have liked to have read in his childhood. »Djuzhina baek Solomona XII« (2007; tr: A Dozen Stories by Salomon XII) tells the story of a family in Odesa — a father, a mother and two daughters — who are missing just one thing: a talkative parrot called Salomon. Like every real Odessite, he has a pronounced sense of humor and tells stories in which fact and fiction are indistinguishable. The story of »Wortschanija starogo taksa« (2007; tr: The Mumbling of the Old Dachshund) is also set in this family, this time with the story told by a dachshund. The tales of the rat Matilda »Matilda-midija« (2007) also come from the parrot Salomon’s rich imagination.

In Nademlinsky’s adventure novel for children »Ob istschesnuwschem gorode« (2008; tr: The Vanished City), twelve friends set out in search of a place that has disappeared from the map. After the mother of one of the boys notices that ninety percent of all crimes and secrets of our time can be solved with the help of a normal computer, they found the »Bureau of Virtual Detectives« and solve their first case.

Nademlinsky’s most recent children’s book »Malenka Widma ta Kip« (2018; tr: The Little Witch and Kip) tells the story of twelve-year-old Marinka, who gives shelter to a stray cat and then finds to her surprise that it is a gift from a magician. Marinka is faced with the decision of whether to continue living a normal human life or to let herself be initiated into the ancient art of magic. She chooses the latter and embarks on many exciting adventures.

Nademlinsky won several literary competitions, including a prize from the »Kinologos« International Film Festival. He also came second place in the »Korniychukovskaya Competition« in 2013.