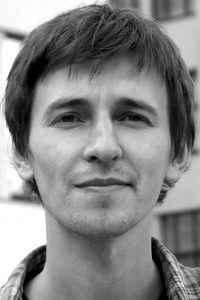 Pavlo Stekh was born in the village of Berlyn, located in the Lviv region. At the age of sixteen, he moved to Kharkiv, where he works as a journalist for various media including the online magazine Lyuk Media. He is well known among the public for his reports about trains and railway stations. During his travels across Ukraine and his stops at railway stations, Stekh had conversations with passengers and created a portrait of contemporary society in his book »Nad prirwoju w irshi« (tr: Over a Precipice, in Rust). In his texts, Stekh focuses above all on those population groups who are not usually visible in the media.