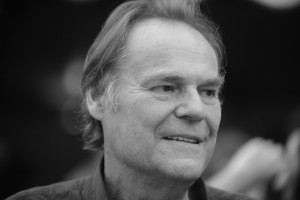 Peter Schneider was born in Lübeck in 1940. He grew up in Freiburg, where he studied German, history and philosophy, and completed his education in Berlin. He wrote speeches for SPD politicians during the 1965 parliamentary election campaign. Then, in 1967–68 Schneider became one of the spokespeople of the movement of 1968. It was a time of awakening, of hope and utopias. Schneider deals with this period critically in his autobiographical work »Rebellion und Wahn. Mein 68« (2008; tr. Rebellion and madness. My 68).

Schneider has written narratives, novels, screenplays, reportage, essays and speeches that raise incisive questions regarding the political and ideological issues of his time. His narrative »Lenz« (1973) is a reinterpretation of Büchner’s »Lenz«, whose desire for freedom proved to be his undoing. The Lenz of the late 1960s is an activist, sporting placards and polemics, who attends demonstrations and sit-ins. When his girlfriend leaves him, the life he has led until then appears futile and he sets off on an almost purgatorial journey through Italy. There, he discards his overly intellectual theories and discovers a new, freer side of himself. In »Der Mauerspringer« (1982; Eng. »The Wall Jumper«, 2005), Schneider deals with »the walls in one’s head«, a term he coined. »Paarungen« (1992; Eng. »Couplings«, 1996) was Schneider’s first novel. It is a detailed examination of the faded beliefs of the student movement of 1968. All memories begin in a particular pub, where the main character, Eduard, converses with his friends. He is a molecular biologist and has long been a part of the society he once railed against and explores what remains of those leftist utopias twenty years on. Schneider’s volume of short stories, »Das Fest der Missverständnisse« (2003; tr. The feast of misunderstandings), is a collection of new and old narratives. He uses succinct and deceptively simple language to capture the moments in which understanding is challenged. This is the case of Burk, who dedicates himself to his research into the history of Nazi medicine, allowing it to become an obsession that eventually breaks him (»Skizze eines Enthüllers«; tr. Sketches of a revealer). In »Die Lieben meiner Mutter« (2013; Eng. »My mother’s loves«, sample 2014), Schneider works through his mother’s correspondence with her lover during the Nazi era and war, along with the story of his own childhood in the Bavarian countryside. He subsequently published his poetic and very personal portrait of Berlin, »An der Schönheit kann’s nicht liegen« (2015; tr. It can’t be the beauty), in which he paints his adoptive home as the »eternally unfinished city«, featuring all kinds of absurdities.

Since 1985, Peter Schneider has regularly been a visiting lecturer at various American universities including Stanford and Princeton, as well as being writer-in-residence at Georgetown University in Washington D.C. He lives in Berlin.