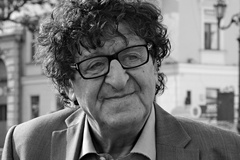 Robert Schindel was born in the Upper Austrian municipality of Bad Hall near Linz in 1944. As the son of a Jewish communist, he survived the Nazi regime living under a false name in a jewish children’s hospital in Vienna. His father was murdered in Dachau, while his mother survived the concentration camps Ausschwitz and Ravensbrück. Schindel left school early and began an apprenticeship in a publishing house. He went on to complete his schooling in 1967 and then studied philosophy, during which time he was involved in the student movement and published his first texts. His debut piece, »Kassandra« was published in 1970 – a text that initially appeared in »Hundsblume«, a magazine co-founded by him. This early work of prose is interspersed with dialogues, quotes, autobiographic memories and illustrations. Because of its avant-garde form, or rather, formlessness, the novel is regarded both as an aesthetic experiment and at the same time a precise contemporary portrait of Schindel’s generation around 1968. Before earning his living as an author, Schindel worked in very different jobs, for example as a librarian or as an editor for the news agency AFP.

He published numerous volumes of poetry, essays and short stories. In his second novel, »Gebürtig« (tr.: »Native Born«, 1992), he writes about the Holocaust, the present and the futile attempts to escape from the past through a great number of characters whose fates are more or less interlinked with one another. In 2001, the book was filmed under the direction of Lukas Stepanik and the author himself using a script created in collaboration with George Stefan Troller. Schindel’s third novel »Der Kalte« (tr.: »The Cold One«, 2013) sheds light on the late 1980s, in particular on the Waldheim scandal. Again told from multiple perspectives, but with the new feature that some of the characters are narrated both in the first and in the third person, the author uses elements of the roman a clef to paint a broad and haunting panorama of the city with the quiet figure of Edmund Fraul at its centre, an Ausschwitz survivor who is scarred by his past and who lives in a permanent state of fear.

In addition to his work as a writer, Schindel organises writing workshops and gives lectures on the literary analysis and creative writing as a Professor at the Institute of Creative Writing at Vienna’s University of Applied Arts. Robert Schindel has received many awards, including the Literature Prize of the City of Vienna (2003), the Willy and Helga Verkauf-Verlon Prize (2005), the Jakob Wassermann Literature Prize (2007) and the Cultural Prize of Upper Austria (2009). Schindel lives in Vienna.

Die Nacht der Harlekine [The night of the harlequins]