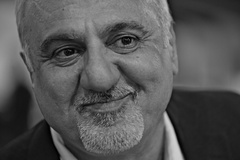 Samuel Shimon was born in 1956 in Al-Habbaniyah, Iraq. He left his home country in 1979 and worked with the Palestinian revolution in Beirut until 1982. Then he lived in Nicosia, Cairo and Tunis, where he worked as a journalist, before moving to Paris in 1985. There he became acquainted with a local group of Arab artists and intellectuals and survived doing casual works. He also set up a small publishing house Gilgamesh Editions.

He relocated to London in 1996 where, together with his wife Margaret Obank, he founded the independent literary magazine »Banipal« in 1998. The magazine, which is released three times a year, is a unique forum for modern Arab literature and publishes short stories, poetry, essays, interviews, reviews and excerpts of novels translated into English. The well-known Iraqi writer and translator Fadhil Al-Azzawi already praised the magazine in 2004 for the work it does: »Banipal’s« influence, he said, was more important than all of the Arab cultural ministries put together. In 2003, Shimon also set up the now discontinued online cultural journal »Kikah«, which also acted as a digital podium for an open exchange of opinions and a publication platform.

Shimon is also a writer of short stories and poems as well as a publisher of anthologies. His debut novel »An Iraqi in Paris« (2005) was highly praised by the critics and compared to works by authors like Henry Miller, among others. The reviewer at English newspaper »The Independent« saw it as »an Arabic answer to Miller’s ›Tropic of Cancer‹«. The newspaper, »Al-Hayat«, which is written in Arabic but published in London, complimented the book’s powerfully expressive and atmospheric style and referred to Shimon’s first novel as »a jewel of autobiographic writing«. In the Arab world, the novel-like autobiography advanced to become a bestseller. It has been translated into English, French, Swedish and excerpts of it into German. Humorous, poetic and fast-paced, Shimon writes about his decision to leave his home country, his original ambition to become a film director, his life in Paris, his refuges the Paris Métro as well as encounters with Samuel Beckett or Jean-Luc Godard or – in one phantasmagorical episode – also with a ghost wandering around Père Lachaise cemetery. Shimon’s second novel »Sankhiro« (2013) will celebrate its premiere in December 2013 at Beirut’s Book Fair and is to be translated into English titled »Underwear Under War«.

He has also set up the new, quarterly released magazine »Kikah for International Literature«, which sees the continuation of the literary agenda once presented on the online platform. Samuel Shimon lives in London.