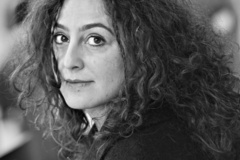 Sema Kaygusuz was born in 1972 in the Turkish coastal town of Samsun. Her childhood was marked by frequent moves, as her father was often posted by the military to different towns in Anatolia. This granted the author glimpses into the diversity of landscape and culture in her home country at an early age, which to this day form the narrative panorama of her literary work. Kaygusuz studied communication studies in Ankara from 1990 to1994, and during this time wrote her first short stories, which won several small prizes. After graduating she moved to Istanbul, where she worked on various stories that were published in several collections.

Her first short story collection, »Ortadan Yarısından« (1997; tr: In the Middle of the Half), already made it clear that Kaygusuz was primarily interested in people’s internal struggles with the disagreeable or concealed portions of their personalities. Metamorphosis and death are as central as the quest for a true inner home, the entrance to which is often buried. Her next two collections of stories, »Sandık Lekesi« (2000; tr: Box Stain) and »Doyma Noktası« (2002; tr: Saturation Point) established Sema Kaygusuz as a distinctive voice in the new millennium‘s canon of young Turkish literature, which increasingly addresses questions of identity and individuality. The author’s début novel, »Yere Düşen Dualar« (2006; tr: Wine and Gold), in which a young woman is confronted with the shattered identity of her alcoholic father and attempts to heal his psychic wounds through mythological stories she devises herself, brought her recognition beyond Turkish borders for the first time. Most recently, after contributing to the book »Multikultur 2.0. Willkommen im Einwanderungsland Deutschland« (2011; tr: Multiculture 2.0. Welcome to the Immigration Country of Germany), she published a volume of stories titled »Karaduygun« (2012; tr: Black Bile) about the heightened senses of the Istanbul poet, Birhan Keskin. The following year she published the novel »Sultan ve Şair« (2013; tr: Sultan and Poet). Her work contains a language that is both musically inspired and highly visual, which is engaged in constant discourse with the mysterious inner life of the narrative subject.

The author has also explored other artistic genres, including screenwriting. Among the films she has written screenplays for is Yeşim Ustaoğlu’s »Pandora’nın Kutusu« (2007; tr: Pandora’s Box), which won the Golden Shell at the 2008 San Sebastián International Film Festival. The author has won the Cevdet Kudret Literature Prize and the France-Turquie Literary Award. In 2010 she lived in Berlin by way of a DAAD grant; she now lives in Istanbul, where she teaches creative writing.