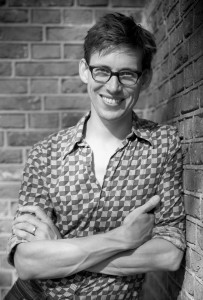 Simon van der Geest was born in Gouda, the Netherlands, in 1978. He earned a degree in theater at ArtEZ University of the Arts in Arnheim, where he acted, directed and discovered his passion as a playwright. He then completed a drama writing course in Utrecht and now not only shares his expertise with children and young adults, but also writes stories, poems and theater plays, mostly for young readers.

Van der Geest’s debut as a children’s book author, »Geel gras« (2009; tr. Yellow grass), tells the story of Finja, a young girl left behind on a campground. She befriends a young boy named Jantwan, whose parents, in contrast to hers, are overly protective. Finja decides to no longer rely on adults, but to become famous so that her parents will finally take notice of her. But this spirited endeavor proves to be a difficult task in this dynamic summertime story of friendship and courage. In 2010 van der Geest published the book of poetry »Dissus«, an adaptation of Homer’s »Odyssey« for young readers, with illustrations by Jan Jutte. The book received the Golden Stylus for best children’s book of the year. The jury praised van der Geest for his virtuoso language and exceptional skill in describing feelings. His third children’s book, »Spinder« (2013), also received the Golden Stylus. In that book, a young boy named Hidde writes in his diary how he and his brother Jeppe quarrel over their cellar, which Hidde covets as an insect laboratory but his brother wants as a drum studio. As the story unfolds, readers find out that this fraternal struggle has its roots in a corrosive family secret that weighs heavily on the two boys: the death of their older brother in that very cellar. Insects, which Hidde wants to observe, provide a narrative theme that pervades the book, as Hidde seeks comfort in them when his traumatized mother proves unresponsive. »An insect must make do without its mother after only a few days.« The book was nominated for the 2017 German Children’s Literature Award. According to the »Süddeutsche Zeitung«, the intimacy that arises from the author’s use of »Du« – the more personal form of »you« – in the diaries and his mastery of how children speak in combination with the dramatic family history create a »truly outstanding children’s book«. The »FAZ« also praised the »author’s keen sense for the […] imagination and emotional world of children«. In 2015 van der Geest wrote »Per ongeluk!« (tr. Fluke!), a story about ingenuity and a boy who convenes with two friends in a deserted barn to devise a rescue plan for his wrongfully imprisoned mother.