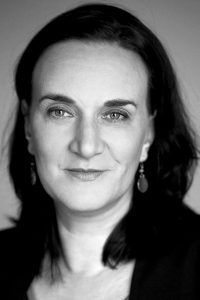 Terézia Mora was born in 1971 in Sopron to a German-speaking family and grew up in the Austrian-Hungarian border region. In 1990, she continued her education in Hungarian studies and theater studies at the Humboldt University in Budapest.  She trained as a screenwriter at the German Film and Television Academy (DFFB). She also began writing stories and novels in German and made her debut in 1999 with the collection »Seltsame Materie« (tr: Strange Matter). In the same year, she won the Ingeborg Bachmann Prize for her story »Der Fall Ophelia« (tr: The Case of Ophelia). The texts reflect life in an authoritarian system, a decaying world shortly before the turn of the year 1990, and are characterized by cinematic narrative techniques such as hard cuts, notes in brackets, and a wealth of images.

Mora received the Leipzig Book Fair Prize for her first novel »Alle Tage« (2004; Eng. »Day In Day Out«, 2007). Abel Nema, who left his homeland after being conscripted to the war, speaks ten languages and even finds work as a translator. Nevertheless, he remains a stranger in his new environment, a figure on the margins of society. Despite his many talents, he ends up despairing.

The protagonist of Mora’s next novel, »Der einzige Mann auf dem Kontinent« (2009; tr: The Only Man On the Continent), is the IT specialist Darius Kopp, a »hero of our time«. The book tells the story of a corpulent forty-something who specializes in Internet security and, in contrast to his highly sensitive and suicidal wife, leads a life driven by shopping frenzies, eating binges, and panic attacks. With »Das Ungeheuer« (2013; tr: The Monster), Mora continued the trilogy of Darius Kopp, and received the German Book Prize for the novel. Here, Kopp not only loses his economic security but also his wife Flora, who has taken her own life after suffering from depression. After months of grief, he finally buries the urn with Flora’s ashes in their home country, Hungary. In this road trip story, Kopp gets to know his wife posthumously by reading her diary entries. The third part of Darius Kopp’s trilogy will be published by Luchterhand Literaturverlag at the beginning of September 2019 under the title »Auf dem Seil« (tr: On the Rope). In it, Darius Kopp returns to Berlin after years of traveling the continent. He is now fifty years old, single, without an apartment or a job, and has to integrate himself back into society just like many other »runaways«.

Mora’s Frankfurt poetics lectures were collected in the volume »Nicht sterben« (2015; tr: Don’t Die). The texts of her latest collection of stories, »Die Liebe unter Aliens« (2016; tr: Love Among Aliens), revolve around men and women who are determined to find love despite an atmosphere of general alienation. »Hardly any other author approaches her ›heroes‹ with as much empathy as Terézia Mora – and none express this closeness more precisely and beautifully.« (»NZZ«)

Mora has been awarded many prizes and scholarships for her literary work and the Georg Büchner Prize for her complete oeuvre in 2018. In 2015, the German Academy for Language and Poetry elected her as a member. Mora also translates contemporary Hungarian prose into German, including texts by Péter Esterházy, Zsófia Bán, and Zoltán Danyi. She lives in Berlin.