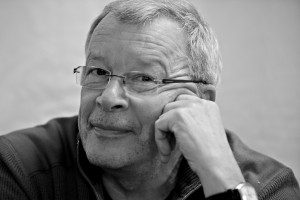 Viktor Erofeyev was born in 1947 in Moscow. His father worked as an interpreter for Vyacheslav Molotov, among others, and later in life also for the Soviet ambassador in France. Because of his diplomatic activities of his father, Erofeyev spent some if his childhood in Paris. He studied philology and linguistics at Lomonsov University in Moscow and gained his doctorate with a dissertation about Dostoyevsky and French Existentialism. In 1979, he collaborated on compiling the literary almanac »Metropol«, which caused a political scandal when it was released resulting in Erofeyev’s expulsion from the writers’ association of the USSR. After the collapse of the Soviet Union, Erofeyev re-released the almanac, which he referred to as an »X-ray machine that roentgenized the whole of society«, in a series of anthologies.

His debut novel »Russkaja krasavica« (1989; Eng. »Russian Beauty«, 1990) depicts with ambiguous humour the rise of a Russian femme fatale from the provinces – gained through naiveté and calculation – as she moves into Moscow’s privileged circles. This in some parts grotesque analysis of society became a bestseller and was translated into 25 languages. In »Choroschi Stalin« (2004; Eng. »The Good Stalin«) Erofeyev reflects on the power structures that prevailed under Stalin, particularly in the entourage of consultants, translators and diplomats to which his father also belonged. The novel-like autobiography ultimately illustrates how artistic and political freedom mutually depend on one another. He also dissects contemporary Russia, of which he is often a controversial critic – from his participation in the Russian TV show »I’m a Celebrity, Get me Out of Here« right up to the trial of Pussy Riot – in the essay collection »Russkij apokalipsis« (2005; Eng. »Russin Apocalypse«), which brings together 55 of his texts from a period of 15 years resulting in an often bitingly commented chronicle. Erofeyev’s most recent novel »Die Akimuden« (2013) condenses the »apocalyptic« attestations of Erofeyev’s essays into a satirical and surreal political parable augmented by various espionage and love affairs. While the dead rise up again causing demographic pandemonium, the tense situation in Russia escalates to become the fictitious state of the title. In a burlesque manner, Erofeyev exaggerates the political mechanisms and has the diplomatic tribulations end in a crucifixion on Red Square. In 2015, he published his essay collection »Telo« (tr. Body), which offers ironically humorous texts on different aspects of the human body and its connection to the psyche as well as an expansion of the term to include the state and its relationship with the individual.

In addition to his literary work, he also occasionally works as a moderator and regularly writes essays, columns and reports for the features pages, including for the »Frankfurter Allgemeine Zeitung«, »Die Zeit«, »Die Welt« and die »New York Times Book Review«. Erofeyev lives in Moscow.