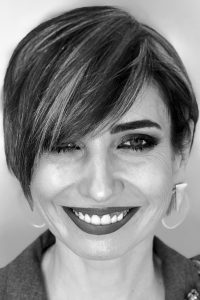 Yulia Werba was born in 1974 in Odesa. She studied at the Odesa Institute of Marine Engineers and became a hydraulic engineer specializing in wave power. She later worked as a journalist for Odesa State Television and was editor-in-chief of the youth magazine »NON« as well as production manager at the radio studio FIL. She was responsible for the campaigns of the regional headquarters of the organization »Front Smin« (tr: Front for Change), which was registered as a party in Ukraine from 2007 to 2013. She then went into advertising, where she worked as a copywriter and developed advertising strategies, scripts, and videos. Werba was creative director of the advertising company »Pobeda« from 2002 to 2017. At the same time, she wrote about eight scripts for films and mini-series (seven of them comedies) for the film company »Visitcinema«, as well as fifty episodes of good-night fairytales for the evening program of the television station »Tonis«. From 2016 to 2017, she was a columnist for the news agency »Zachem«, and in 2017, she joined »dlinni fokus«. She wrote her first story for »Zachem«’s portal and found so much approval among readers that they demanded a sequel. Shortly thereafter, Werba had her own column. In 2017 she finally débuted as a writer and published the stories in the anthology »Moldovanskoye otrodie« (tr: The Riffraff of Moldovanka). In it, she describes her childhood in the 1980s in the Moldovanka district, without falling into the typical clichés of Odesa’s backyard life. This late and post-Soviet period was marked mainly by poverty, but also by cheerfulness and the unmistakable atmosphere of the city of Odesa. Even for readers who are unfamiliar with this world, the authentic and realistic description of the people and their lives makes this time tangible. Not all the events described in the volume are real; Moldovanka’s characters are often typecast. »I wanted to convey this wonderful feeling that you actually come to Odesa to experience. It is a state of absolute and carefree happiness, the joy of life, the pleasure one feels in it, as in oneself and everything that surrounds one. I hope I have succeeded.« Lesya Werba, the author’s sister, created the illustrations for the stories. The volume was reprinted and expanded in 2018. In the same year, the filming of the stories for a television series began.

In 2011, Werba and her contribution were long-listed for the Russian short story competition »FloridaKon«. She lives in Odesa.