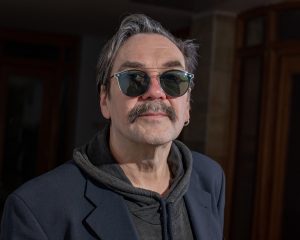 Yuri Andrukhovych was born in 1960 in Ivano-Frankivsk, Ukraine. After studying journalism in Lviv and completing his military service, his literary career started with a bang: in 1985, together with Viktor Neborak and Oleksandr Irwanets, he co-founded the performance group Bu-Ba-Bu (Burlesque, side show, buffoonery) which had a lasting influence on the Ukrainian literary scene, especially in the years between 1988 and 1992. Their criticism of real socialism was expressed in poetic experiments combining satire, sound poetry and carnival elements.

After publishing his first collection of poetry, Andrukhovych applied his preference for the complex and the grotesque-carnivalesque to his novels »Rekreatsiyi« (1992; tr: Recreations), »Moscoviada« (1993; tr: Moscoviad) and »Perverziya« (1996; tr: Perverzion), which made him the most controversially discussed author in contemporary Ukrainian literature. The surreal satire »Rekreatsiyi« deals with the social and political situation in Ukraine immediately before independence. »Moscoviada« is a requiem for the Soviet Union and is based on the author’s experiences in Moscow from 1989 to 1991. »Perverziya«, a post-modern variation on »Death in Venice«, is notable for its complex structure, wealth of motifs, plot-lines, narrative elements and a baroque delight in word games. The inspiration for Andrukhovych’s literary activism is the unusual situation of his home country. Though now bordering the EU after Poland’s inclusion, Ukraine still remains terra incognita in Western Europe and the USA. This (non-) localisation of Ukraine in Europe is the subject for the author’s reflection in »Das letzte Territorium« (2003; tr: The Last Territory), a collection of essays in the form of »fictional regional studies«, which he wrote in German. Andrukhovych took part in the oppositional demonstrations during the Orange Revolution. His first novel to be translated into German, »Dvanadcjat’ obrutschiv« (2003; tr: Twelve Rings) depicts the chaos of the post-Soviet transitional period and the birth pains of a new state as a colourful collections of Hutsul folklore, Mafiosi businessmen, artists, bizarre characters from the advertising business and shifting love stories. In 2014 Andrukhovych published the book »Euromaidan. What is at stake in Ukraine «- about the hope for renewal of Ukrainian society. His novel »Kochanzi Justizii« (2017; tr. Beloved by Justice) is about rebels and idealists in difficult, often tragic situations and is related to the history of Ukraine, its mysticism and its legends. Most recently, »Radio Nic« (2020; tr. Radio Night) was published, a lyrical novel in which adventure is interwoven with fantasy and David Bowie meets traveling musicians from the Middle Ages.

Andrukhovych has won many national and international awards, including the unique Erich-Maria-Remarque-Peace-Prize in 2005 and the Leipzig Book Award for European Understanding in 2006. In addition, he was a guest of the DAAD in Berlin in 2005. The author lives in Ivano-Frankivsk.

Songs for the Dead Rooster