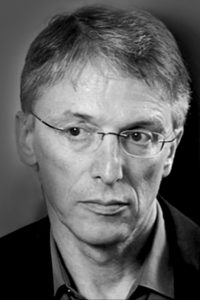 Yuri Slezkine was born to a Jewish family in the Soviet Union in 1956 and studied translation in Moscow. In 1982, he moved to Lisbon, and one year later, went to the USA, where he received his doctorate from the University of Texas at Austin and now works as a historian, author, translator, and university lecturer.

His collection of essays »Between Heaven and Hell: The Myth of Siberia in Russian Culture« was published in 1993. Together with Galya Diment, he investigates perceptions of the landscape beyond the Urals in Russian cultural and social consciousness; they are seen as Russia’s alter ego, the heavenly or hellish antithesis to Russian life. In this respect, Siberia is both the heart of darkness and a wonderland of abundance, a »house of the dead« and a territory of absolute freedom. One of the main themes of Slezkine’s research can be seen in this first publication: the illumination of various aspects of Russian history with a focus on minorities inside and outside Russia. In 1994, the book »Arctic Mirrors: Russia and the Small Peoples of the North« followed. Here, Slezkine analyzes official Russian politics and the prevailing attitude towards the northern peoples using various sources, and contrasts them with the expressive narratives of Russian and indigenous contemporaries as well as with metaphors in popular Russian literature. Slezkine’s essay »Swann’s Nose: The Jews and Other Moderns« (2004), his contribution to the study of the Jewish historical experience, was controversially received by German critics. Using Kafka, Proust, and Joyce as examples, he shows, among other aspects, Jewish and non-Jewish variants of a development tendency towards communism, Zionism, and the pluralistic, multi-ethnic liberalism of America. In »The Jewish Century« (2004), Slezkine also dedicates himself to Judaism in the 20th century. The title of his most recent publication, »The House of Government: A Saga of the Russian Revolution« (2017), alludes to the nickname of a Moscow building that was built in the late 1920s as a residential building for the Soviet Union’s elite, where the history of the USSR was represented in a special way. Slezkine combines the history of political struggles from the first Bolsheviks to Stalin’s terror and contemporary Russia with the biographies of the people whose lives are linked to this house.

Slezkine became a member of the American Academy of Arts and Sciences in 2008. He currently teaches at the University of California, Berkeley.

Between Heaven and Hell: The Myth of Siberia in Russian Culture
Palgrave Macmillan
Basingstoke, 1993.