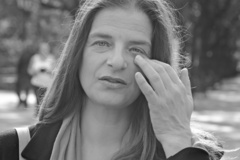 Tzveta Sofronieva was born in Sofia in 1963. She completed her studies in physics in 1986, going on to gain her PhD in the history and philosophy of science in 1991 and attended a poetry master class with the Russian-American Nobel Laureate Joseph Brodsky. She worked several years as a cultural correspondent for Radio Free Europe. She speaks five languages and writes her texts in Germany, English and Bulgarian.

Her first collection of poetry »Chicago Blues« (1992) was released as a bilingual edition. In all of her occupation with the ephemeral, line-bound fragments of memory and longings, what really stands out in Sofronieva’s work is the way her poetic perspective has been sharpened by her knowledge of the natural sciences, something that is characteristic for her poetry collections from »Empfangendes Gedächtnis« (tr. Conceiving Memory, 1984) to »Wahrnehmungen« (tr. Perceptions, 2006). In »Die Einsamkeit der Biene« (tr. The Solitude of the Bee, 2013) she confronts an overwhelming past with the immediate present of her poetic contemplation. In her poetry collection »A Hand full of Water« (German/English, 2012) as well as in her literary installation »My Cyborg Identity« (Boston, 2012), she questions the translatability of meanings, experiences and feelings. »Diese Stadt kann auch weiß sein« (tr. This City can also be White, 2010) is a collection of Sofronieva’s short stories. The story that lends its title to the volume is the first text she wrote in German in 1995. In it she laments the secretiveness of the inhabitants and passers-by in a nameless city; a silence that in turn leads to an individual, poetic and essential contemplation of space and time.

In the nineties, Sofronieva initiated a network of authors from all over Europe who took a close look at memory and multilingualism. From this emerged, among others the anthology »Verbotene Worte« (tr. Forbidden Words) which she released in 2005. Intermedial and multilingual cooperation continued to be her passion and 2010 she also edited the »11 9 Web Streaming Poetry« anthology dedicated to the events of the 9.11. and 11.9. and containing poems from 119 international poets. Sofronieva’s work has been translated into a number of languages, among them French, Finnish, Hungarian, Polish, Serbian, Spanish and Uzbek. She has received several grants and awards for her poetic work, including the Poetry Prize of the Bulgarian Academy of Sciences (1988) and the Adelbert von Chamisso Prize (2009) and has been writer-in-residence among others at the Academy Schloss Solitude in Stuttgart (1996), at the Villa Aurora in Pacific Palisades (2005), at the Max Planck Institute for the History of Science in Berlin (2010) and, most recently, a Max Kade Writer-in-Residence at MIT in Boston (2012). Sofronieva lives in Berlin.