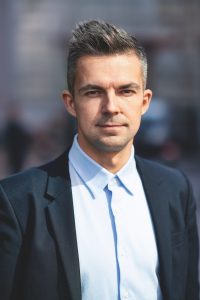 The Belarusian writer Sasha Filipenko was born in Minsk in 1984. After attending the Akhremchik Lyceum of Arts, he studied humanities in Saint Petersburg, graduating with a master‘s degree in 2009. He has worked as a journalist, screenwriter, gag writer for a satire show, and television host. Filipenko’s début novel, »Бывший сын«  (2014; tr: Ex-Son), is about a young man from Minsk who falls into a coma after an accident. After ten years of being cared for by his nurturing grandmother, he awakens, but his country, Belarus, remains in a coma. Filipenko received the Russian literary prize »Russkaja Premija« for his novel, which the author wrote in response to the 2010 crackdown on protests when President Lukashenko was declared president for the fourth time. In »Красный крест« (2017; Eng. »Red Crosses«, 2021) he traces a narrative arc from the World War II era to the present. A 90-year-old woman in Minsk who is slowly losing her memory paints red crosses on the doors of her apartment block so that she can always find her way back to her home. However, the distant past has remained alive for her in all its details. Thus she tells her new neighbor, a young man who has just lost his wife and whose life has been was brutally ripped in two, her whole life story, including the horrors of the Stalin era and the war in which her family was destroyed. To write his novel, Sasha Filipenko drew from historical documents, especially those concerning the activities of the international Red Cross movement which, despite the best of intentions, played into Stalin’s hands regarding the persecution and punishment of Soviet prisoners of war during World War II. Filipenko’s latest novel »Возвращение в Острог« (2019; tr: Return to Ostrog) is also based on true events and depicts the drama in a suburb of Moscow, where the prison and a children’s home are the only sights to see. The suburb hits the headlines after several children from the orphanage commit suicide.

Nobel laureate and compatriot Svetlana Alexievich said about the author: »Sasha Filipenko is one of the young authors who became serious writers in one fell swoop. If you want to know what modern young Russia is thinking, read Filipenko.«

In 2020, Filipenko hosted the weekly program »Na troich« on the Russian TV channel RTVI and launched his own YouTube channel »Byvschi syn«, where he supported Belarusians with solidarity readings before the elections. In the same year, the play based on his novel »Krasny krest« premiered at the Gogol Center in Moscow. Filipenko writes in Russian and Belarusian. His novels have been translated into French, German, Czech, Hungarian, Polish, Italian, English, Croatian, Dutch, Spanish, and Japanese.

He lives in Saint Petersburg and in Switzerland.