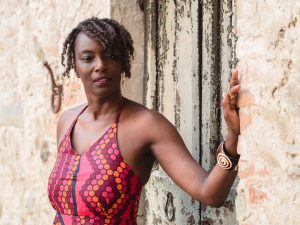 Yvonne Adhiambo Owuor was born in Nairobi, Kenya in 1968. She studied English and History at Kenyatta University, earned a Master of Arts at the University of Reading in the UK, and an MPhil from the University of Queensland, Australia.
The literary magazine »Kwani?«, founded by Binyavanga Wainaina, published her short story, »The Weight of Whispers« which earned her the Caine Prize for African Writing in 2003. The narrative takes the perspective of an aristocratic refugee who escapes genocide in his unnamed country to go into exile in Kenya with his family. Her fragmented, poetic, fast-paced, and emotionally charged style continued with her highly acclaimed debut novel, »Dust« (2014). Through the lives of a dysfunctional multi-ethnic family centred in the north of Kenya, the book recounts the story of Kenya from colonialism, touching on the intimate impacts of World War II, the Mau Mau revolts, the 2005 referendum and the 2007-8 post-election violence. In a breathless prologue the son, an idealistic engineer is shot on the Nairobi street. The tragic loss forces the bereaved family to work through their own complicated past. Owuor’s second novel, »The Dragonfly Sea«, was published in 2019. It is the coming-of-age story of a girl named Ayaana, who lives with her mother on Pate, an island off the coast of Kenya. As she grows up, Ayaana experiences profound changes on her island: religious extremists show up, a tsunami hits, and China seeks cultural emissaries and a resolution to a 600-year old sea mystery. Ayaana embarks on a voyage by cargo ship to seek her fortune and future in the great wide open world, and ultimately, finds herself.
Owuor’s many short stories and essays have been published in a few international journals and magazines, including the »New Daughters of Africa« anthology. One of these, »The Knife Grinder’s Tale« was adapted as a short film in 2007. Owuor has been honoured by her country for her artistic and cultural contributions, including a Head of State Commendation in 2018. In 2005 she was invited to participate in the International Writing Program at the University of Iowa, and again in 2017, when she returned as the first IWP Grinnell Fellow. In 2010, as a participant in the »Pilgrimages« project initiated by the Chinua Achebe Center, she travelled to Kinshasa and recounted her experiences in a travelogue titled »Milobela«. In 2018/19 Owuor was a Fellow at the Wissenschaftskolleg zu Berlin, and, later, at the Institut d’Études Avancées de Nantes. She was the 2020 Dorothea Schlegel Artist-in-Residence, attached to the Freie Universität, EXC 2020 Temporal Communities project. Owuor previously worked as a computer technologist, event producer, and an arts academic programme developer. She is still involved with creative content development initiatives, arts event production, and Africa-Asia trans-ocean conversations. The author currently lives in Nairobi. She is a 2021 guest of the DAAD Artists-in-Berlin Program.

The Weight of Whispers